Voles are a big problem in St. Louis lawns and are often confused with yard moles as voles often move into evacuated mole tunnels, cutting holes in the tunnel tops resulting in an erosion nightmare. Voles can also infest without the presence of moles by cutting concave trenches (left) throughout the lawn.

There are 2 ways to combat voles: Trap or poison. Poison suppliers tell us that the environmental effects of poisoning a lawn filled with voles poses no danger for pests or wildlife. And, for years, we believed that. However, St. Louis' World Bird Sanctuary tells us that St. Louis' Birds Of Prey are endangered, largely due to poisonous carcasses left behind by vole and mole poisons. They say, if a local fox or owl finds poisonous vole or mole carcasses throughout the yard, they'll take the toxic carcass back to the next, often wiping out the entire nest. They don't address whether this applies to your pets, but we're no longer willing to run that risk and DON'T use vole or mole poisons.

If you need Vole Trapping, you can order it on our Trapping Site HERE. If you want to poison them, there are lots of other options around St. Louis. More pics and info on our vole trapping page HERE. 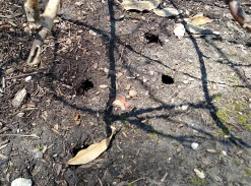 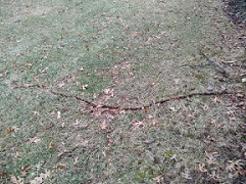